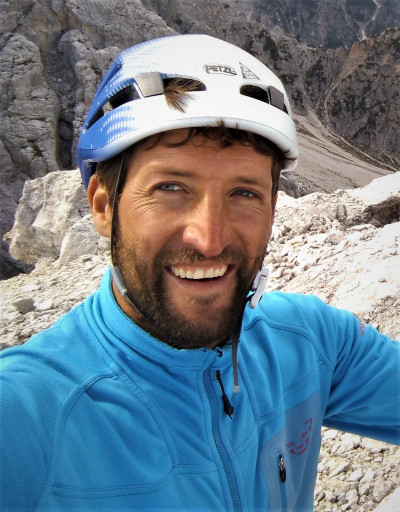 I am ALEX PIVIROTTO, born in Pieve di Cadore on 16-06-1983.
My real passion for the mountains began when I was 13 years old, when I started to go there with some friends from Calalzo. Every year the desire to discover leads me to climb increasingly difficult and fascinating peaks, thus climbing the first sixth grade classics. At the same time I start my first experiences of ski mountaineering.
In 2002 I joined the Soccorso Alpino and later the Gruppo Rocciatori Ragni di Pieve di Cadore (from 2010 to 2016 I was the president).

In 2006, after having passed the selections, I started the course for Aspiring Mountain Guide and in 2010 I became a Mountain Guide.
In these years also my mountaineering activity has been greatly enriched: numerous repeats of routes in the Dolomites and beyond; first ski descents in the Marmarole and Antelao group; new mixed climbs and winter repeats of classic routes.
Between 2013 and 2014 I will become a technical Elisoccorso and National Instructor of Alpine Guides.
In the last few years I have been able to pass on my passion and knowledge to many other people, making even the youngest ones aware of mountain life by organizing many courses and training days.
See you soon among our "crode" (rocks)...