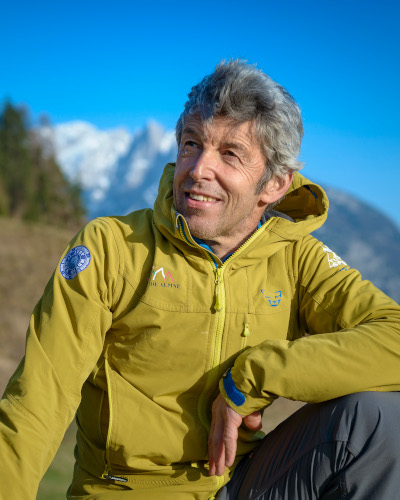 Since I was a child I used to climb everywhere you could climb: plants, walls, grassy walls, morally helped by a 7-meter hemp rope, some bolts from hardware stores, and by companions who one after the other lost confidence in themselves, abandoning me to my destiny.
Having survived these experiences, my aunt, a great lover of the mountain and not a citizen of the world, thought well to ruin her life by telling my parents: "I'll take him to the mountain, so I'll keep an eye on him...", but she probably lost her sight when she saw that I was climbing next to the via ferrata cable without even using it as security.
After several years the CAI of Pieve di Cadore, organized a rock climbing course, with the collaboration of "Ragni". The course was fundamental because it gave me the rudiments of technique but above all it made me know the companions of many future adventures. Let's go back a few years: in my village there were some mountaineers defined as classic, and I was fascinated by their wool sweaters and their stories, and I tried in every way to bribe them to take me to the mountains. But at every appointment they would make up all sorts of excuses, the classic one was that it was going to rain, but as I looked up the sky became more and more blue. Until one day a miraculous combination of events made my dream of climbing a mountain finally come true. But it didn't go as I expected. We took the Bal ledge on Mount Pelmo. Dawn had been out of our hands for several hours and the spectre of an untimely retreat was already haunting my climbing companions. I, at the mercy of their will and their machine, was forced into yet another defeat. But the little fact was enough as an excuse to celebrate at the rifugio Venezia...
I don't remember what happened after the first bottle, but I understood what heroic mountaineering meant: heroic was to be able to get home safe and sound after emptying the bars in half the province.